One of my friends put something on Facebook this morning about people posting the usual thing about losing weight and getting fitter in the New Year. She suggested making a New Years Resolution that could benefit somebody else. It shouldn't  be charity work or sending money to an organisation but something personal, something that requires a bit of effort, something with meaning. Maybe walking an elderly neighbours dog, making a cake for somebody every now and then. Mowing their garden, writing a letter to a friend and maintaining that contact. What do you think you could do? 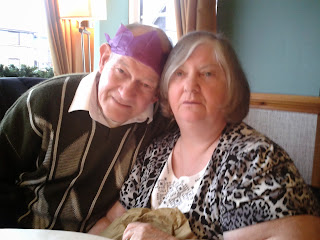 This is my Mum and Step dad on Christmas Day, I think my Mum was taken by surprise by the look on her face! One of the things that happened in the last few months was that my Step dad had a stroke. He has made a marvelous recovery, he went into hospital totally paralyzed down one side and not being able to speak and as he had got into hospital so quickly they were able to administer a wonder drug which reverses the effects of the sthee within hours. He was back out within a couple of days and to look at him you just wouldn't know that he'd had a stroke at all.
One of the things this made us think about was that they lived a bit far away, only about 10 miles but with the unreliability of our minibus and my Mums disabilities it would be too far to walk or cycle, it would be a couple of buses each way so they decided to move closer to us which they did a couple of months ago. This has been brilliant because the boys have been able to walk down to them and help do things that they find hard to do which in turn means that some pressure has been taken off me because I know the boys can take some of the jobs off my hands.
For example yesterday my Mum came down with my cold ( I do like to share!) So today I took them up a roast dinner that I cooked yesterday and a trifle that I'd made so that Ed could spend time looking after Mum and himself as one of the after effects of the stroke is that he gets tired very quickly.
After we'd visited them I went to visit my friend who had baby number 11 on Christmas Day, today was also baby number 10's first birthday, so I got to hold a little newborn which is always a pleasure. It always leaves me feeling really broody though!
When we got home the boys took the dogs out and I did a mountain of ironing despite my dropping the heaviest of hints over the past couple of days that I should be in bed being pampered! We are bracing ourselves for another storm with heavy rain and strong winds tonight, so the rabbits have been covered and secured. We will all snuggle down and be grateful that we can stay indoors and don't have to go out anywhere.
Now I'm off to drink my lemsip! Sniff, sniff !!