My feet don't touch the ground!

It's been two weeks since I lasted blogged ( that sounds like a confession!) I just don't know where the time goes.
We've had Malcolm's and my Mums birthday ( they are on the same day) 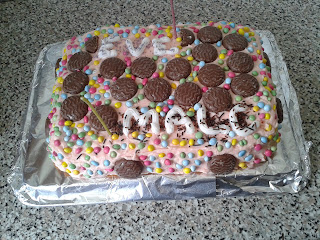 So Callum made this sponge and Clark decorated it. We had a takeaway as a birthday treat together and then some delicious cake.
Eden is off on her travels to America tomorrow so this week has been all about ironing and packing and getting last minute things together for the trip. She's leaving us at 7-30 am and won't touch down until 8-30 our time tomorrow evening so it'll be a long day for her and a stressful one for me until I know she's arrived safely.
We have had about 5 barbeques in the last couple of weeks, most of them at other peoples houses that we've been invited too and we've had some lovely food and company.
Last night we went to a local firework display which is held every Thursday night as a tourist attraction. There are street entertainers and live music. ( Some bands are better than others!)
Then a load of fireworks are let off from a flat barge in the middle of the harbour and I have to say they were pretty impressive.
Tonight the same thing happens in Bournemouth, it's further away so what we do is go to a viewpoint that's nearer to us and we watch the fireworks from there.
I have also been knitting but I've forgotten to take photos so you're just going to have to take my word for it!
Clark and I have also been to a friends house who very kindly helped us to understand an american crochet pattern as their abbreviations are different to ours. Clark was then able to crochet this 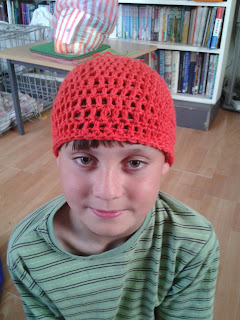 He's also been crocheting a load of mice which I will post pictures of next time.
Callum is knitting a penguin which he hadn't quite finished yet so again pictures to follow.
Right I'm off, honestly it takes me ages to do a post, I'm constantly interrupted by children or the phone!
Posted by Bridget at 13:43