Cooler weather was promised and it has arrived. Hurrah!
It poured with rain in the night and I looked out my bedroom window watching it, it was a glorious sight. I imagine it was the same feeling Noah had when the rain eventually stopped!
Today we went into town as I had to buy Callum and Clark some new wellies as we had a trying on session yesterday and found that they had both grown out of theirs. Callum is now a size 7 at just twelve years old so we had to get his from the mens section. the size 6 in the childrens section was £5 cheaper!
Anyway they are done, we do get a lot of wear out of our wellies and they are usually passed down too.
We are gearing up for all the autumn walks we are going to take with the dogs. I do love Autumn, it's my favourite time of year.
There's nothing nicer than walking through the leaves with a chill in the air and coming home and making hot chocolate with whipped cream and marshmallows. It's became a bit of a custom last year and also helps when little legs are flagging, the thought of that hot chocolate spurs them on a bit!
Malc is picking up the new universal joint on Monday afternoon and the bus is being fixed on Tuesday morning.
I'm really hoping that's the last of garage visits for a while.
The boys also wanted to spend some of their pocket money this morning so Cody bought a battery operated car and Soloman bought a gun (He's gun mad, I hate them!) Callum bought some treats and toys for his rabbit and gerbil and Clark bought these. 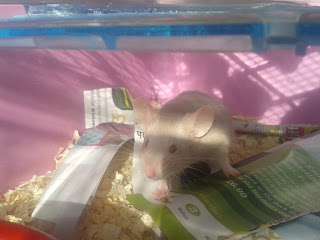 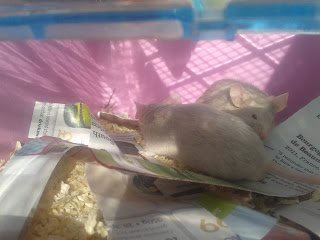 He already has two which are nearly a year old and really wanted some more, Clark does love his little furries!
We've just had a lovely hours walk over the fields near us again tonight and it was beautiful, very busy with other dog walkers and children playing on the swings but lovely nonetheless.
I'm now going to sit down with some strawberry and lime cider that I have discovered.
It simply has to be cider being a Dorset girl and all !
Posted by Bridget at 19:48 5 comments:

In the garage again!

Before I start on my tale of woe I"d like to thank Karen and simplesuffolksmallholder for their comments yesterday. Don"t ask me what happened yesterday with my replies! I replied to simplesuffolk and the reply came up about 5 times, so I had to go through deleting them, it looks a real mess I can tell you.
I also forgot to tell you how my day started off , goodness knows how because it was quite significant!
Our minibus was booked into the garage apparently the donut!!  (yes that's what the garage called it! ) that's attached to the prop shaft had worn and it wasn't half making a noise.
Anyway Malc went to take it down to be fixed, a couple of hours work we were assured. He arrived only to be told one of their ramps had broken so they couldn't do the car today and they rebooked it on for the next day (today) I was a bit miffed and wondered why they hadn't rung us before Malc had driven down there. Anyway he took it back this morning and it's fixed. Unfortunately the reason it was wearing is because the universal joint has broken! I know it may sound like I know what I'm on about  but believe me I don't!
So we've got to get one of them and the garage will sort put fixing that. So no positive vibes for anyone for the next 7 - 10 days I'm afraid! 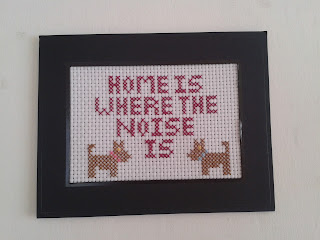 One of my lovely neighbours has taken up cross stitch again and did this as a practice piece and then she gave it to us. I really don't know what she means!
I thought it was lovely and I have framed and hung it.
Beavers starts back up again tonight , Eden has school rehearsals for " Guys and Dolls"  and she also goes to Youth Club later on so Fridays are back to being extremely busy.
I'm now off to supervise cleaning of rabbit hutches.

Run off my feet would be more appropriate! Malcolm has had a rush job on so it"s been all hands on deck. A lot of walking and delivering to houses on foot.
I really don't understand how I'm not 8 stone!
Here is Eden upon her return 2 weeks ago now. Wow! Where did that time go? 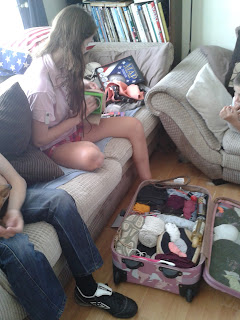 She has got two legs honest! It looks like she's only got 1 1/2 in this picture!
This was taken before she threw the contents of her suitcase all over the floor to be washed!!
She's come home with over 500 photos which I'm sure will appear on this blog over the next few posts.
In between working we have been walking dogs in the evening in this beautiful sunshine. By the evening it's just about bearable for me!
Eden went back to school today and home school started. I'm amazed at how competant a reader Cody has become over the holidays by just spending time reading books by himself. We have school books which are just for schoolwork and they we have about 5 bookcases full of books they can read anytime.
We were also given this a few days ago 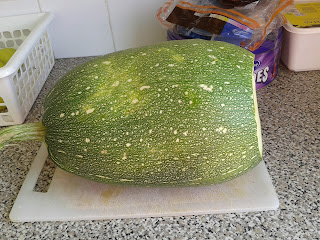 I cut the end off before I thought to take a picture, we've had some steamed for tea but I've seen a recipe on another blog for marrow and ginger chutney so I'm thinking  giving that a go. 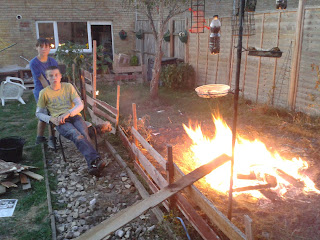 We have had so much cardboard left over from one of Malcs jobs that the boys had a bonfire on my dug over veg patch, they also burnt some wood we've had hanging around the garden. I thought I could dig it all in and it might put something good back into the soil!
Well that's a very quick update, I could go on but I've now got to sort some tea out! Then onto another dog walk. I sometimes wonder why I have a bed and wish I could sleep standing up!!
Posted by Bridget at 16:32 7 comments: