Eden rang last night about 6 ish to say she'd been on the beach all day. Then I received an email about 4 o'clock this morning. I've also had a couple of Facebook messages today so I feel much better. Many thanks to Carol and simple Suffolk smallholder for their words of wisdom yesterday.
As the tittle says, moving on!
Today Clark, Callum and I went to our knit and natter group. We had a few extras there today. Some of the ladies had grandchildren with them. So my boys got out their spare needles and wool and had two of them knitting in no time at all. Passing on knowledge is one thing I'm passionate about. It's OK to have a way with words and be numerate but sometimes I feel practical skills are overlooked and I'm a firm believer in passing on our skills, whatever they may be. As you know Clark crochets and Callum knits so the other day Clark passed on some tips to Callum who can do basic crochet. 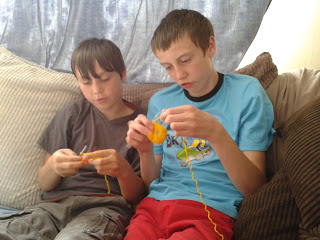 I love that picture, I caught them unaware!
There's nothing better than seeing  my children working together like this. I've learnt to treasure these moments as they don't happen all that often,  they are usually arguing!
A while ago I think I posted a picture of a fireman that Callum had knitted for a local fire station that wants a mascot, this was through a knitting group we belong to. More were needed so myself and another lady have volunteered to  knit one each.
Here's mine, 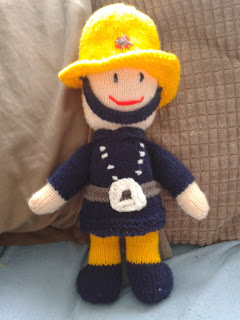 I really don't like to do toys like this, they are very fiddly and involve quite a bit of sewing which I'm not a big fan of.
I also promised a picture of Clarks mice in a previous post, so here they are, 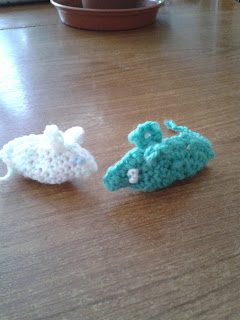 These are two of them, he's made about eight but he's sold some to Callum who's going to wrap some and put them into his lucky dip boxes that he's taking to his next table top sale.
I love the way they negotiate prices with each other with Callum working out how much he needs to sell them for and how much he can pay Clark and then working out the profit.
Priceless!!