We skyped Eden last night, it was amazing. First time I've done anything like that it was great to talk to her. So much gets lost in emailing and messaging.
They went to the Hard Rock cafe and apparently Eden was so excited looking at the wall of guitars.She  also sat in the window of her hotel room for most of the night watching life happening. New York is her dream and she told us she didn't want to miss a bit of it, not even to sleep!
The boys had a good time in the tent albeit not sleeping also ! They were playing on Clark's tablet until the early hours of the morning, but as they were outside it didn't keep us awake!
Callum, Clark and I went to a knitting meeting on Saturday and handed in some of the charity knitting we've been doing. One of the ladies there parcels them all up and sends them off to the right places or gives them to the right people.
We also had my friend with the big family over for a barbeque yesterday. It was one of her lads who stayed with us for the last couple of days.
Today we went for breakfast at the lovely restaurant we go to sometimes. It was as lovely as ever. They still do the deal of 2 children eating free with one paying adult so this is a really good deal for us, we only pay for two adult breakfasts.
I have done a load of ironing this afternoon. We have got barbeque leftovers for tea and I plan a long soak in the tub this evening so quite a nice weekend really.
Whilst I did the ironing the boys made this ready for Wednesday.
They asked if they could do the banner for Edens return which I thought was really sweet. It"s nice that there's no jealousy about her going. They seem to be very excited for her and can't wait in the morning for me to read out the emails and pictures she's sent.
It would be nice if this continued as they all get older but I fear it won't, as they all get partners and have children other influences come into play. But I think that I will enjoy and encourage it at the moment whilst I can
Here's a picture of the banner, it's not string together yet but you get the gist! 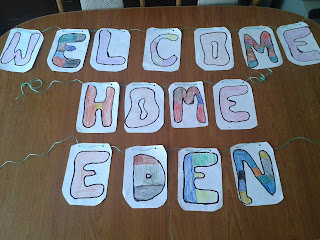