I"ve been reading round blogs all week and I think I must be the only person who is hating this weather. Bloggers are posting beautiful pictures of gardens,days out, half naked children (and even adults!)
Whereas I'm shut indoors with windows open, fans going, grumpy and longing for Autumn. I do love a nice frosty morning!
I was glad to watch the men's Wimbledon final as it meant I could stay indoors and have a good excuse to do so.
Anyway, enough whinging.
The boys have spent most of the day in the paddling pool, schoolwork has been abandoned, there are enough cold/rainy days for us to keep up with schoolwork. All my children are sun worshippers and they are all brown as berries.
I have been doing quite a bit of knitting, I sit indoors or on the bench in our back garden which is in the shade after about 7pm and I knit away. 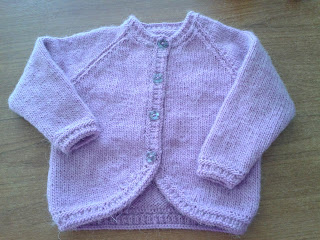 This is for my friend with lots of children, her youngest will be a year old just after Christmas so I've started on their presents already. 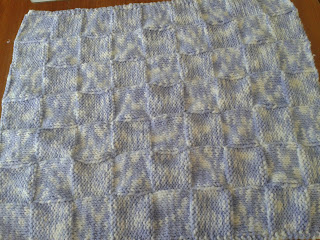 I've done this for another friend, a baby blanket, here's a close up 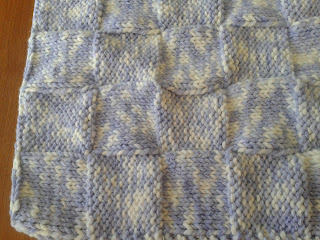 I've started on another baby cardigan but I haven't taken a picture yet.
Behind the scenes the last two weeks have been very busy. Eden has been invited to America by a friend whose Dad lives out there. We've had to get her a new birth certificate as her old one was sent with some documents a while ago and had never been sent back! We've sent request upon request for it!
Then we had to get her passport renewed, it ran out last July. It arrived yesterday which is great as it's just over four weeks until she goes. We've been clothes shopping as it's going to be very hot over there, so another bikini and shorts were needed. We've now got to sort out insurance and a visa.  Eden's obsessed with America, she wants to go and live there after she's finished Uni. I'm not sure if this visit will make her more determined to or get it out of her system!
We have our local carnival next Saturday and all the boys are in it. The Beavers are doing a float of Noah and the Ark, although Cody is the only one actually  in Beavers the others are in Cubs/scouts so they are all helping, either dressing up as animals on the float or walking beside it with buckets collecting money. Unfortunately I won't be able to go, Eden's going to the beach with some friends all day, Malc will have the mini bus, so I will have to stay home to look after the dogs, but the boys have assured me they will take loads of photos, Malc's walking alongside them with a bucket so I'm sure he'll take photos too. So there's a post for next week!
I've hoovered all through upstairs, we've had lunch, tea's prepared so guess where I'm off , yes to open my knitting bag!