How to stop the whining?

For the past few days the boys have been quite fretful, they're bored and no matter what I suggest they don't want to do it!
I'm grumpy myself, although it's been a bit cooler it's still quite hot at night so you're left tired and irritable during the day.
Now one irritable child is doable, two is a bit more challenging, but when there's four of them and you aren't in sweetness and light mode yourself things can go really pear shaped.
Little boys do not understand that minibuses don't repair themselves, garages need to be booked, parts need to be ordered and normal housework still has to be done despite being hot and tired.
So this morning I filled their water bottles and sent them with their Dad to a local park which I think is very under used.
I spent most of the time catching up on all the little jobs that needed doong , although I did take some time to sit and watch the funeral of Lee Rugby as it was broadcast live on the news. So incredibly sad, things like that really help you to put your life in perspective.
Anyway I asked Malc to take some photos for me and he dutifully obliged!
On their bikes and scooters 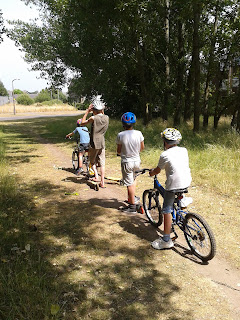 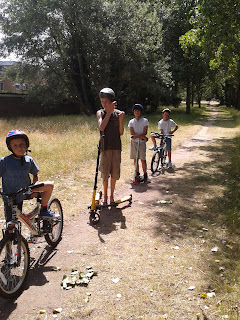 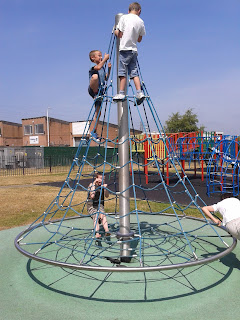 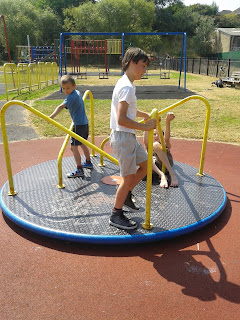 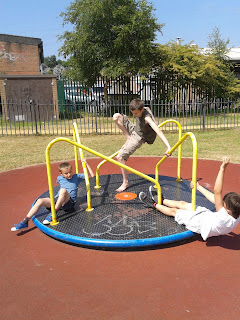 They came home and seemed much happier now that they had use up that excess energy.
Clark has put his tent up in the garden as he wants to sleep out there tonight.
Malc is at Beavers with two of the boys. Tonight they are trying on their animal costumes for the carnival tomorrow , boy is it going to be a hot one!