The girl did good and two broken bones!

Eden collected her results today, she did amazingly well, she got 6A*'s, 4A's and a B in English Language. We've since found out that she was 2 points off an A grade in her English Language. She was gutted when she found that out.
She got 100% in Religion and Philosophy.
She can now go on to do her A levels in Maths, Chemistry, physics and Biology.
Unfortunately her day was overshadowed somewhat by the fact that Clark broke his arm in two places last night.
We'd decided to get chips from the chippie for tea so Malc went down with Callum and Clark who decided to run from the mini bus to see who could be the first to get into the chippie and Clark went flying. I received a phone call from Malc to say that he was pretty sure his arm was broken so off to A and E we went.
Three xrays later  we came home with a lad with both the lower bones in his left arm broken, one fracture was displaced and would possibly need an op and a chance that his elbow was broken too. We got home at 1am only to have to be back at 7am the next morning.
After a very difficult and fraught day today what with lack of sleep, worry and guilt over Edens results day as I was meant to be going with her, we got home about sixish.
Clark's had one of the bones plated with six pins, the displaced fracture  manipulated and was in quite a lot of pain. Thankfully they decided this morning that his elbow was fine.
We've had a day of lots of medical people contradicting each other, me not being able to go to recovery to see him as there was not enough staff available to take me down there, the bone doctor that discharged us wasn't even able to answer Clark's question of where the cut was and on which side of his arm it was where the plate went in even though she'd "read his notes"
Unfortunately he has to go and have the plate taken out again in about six weeks and I'm dreading that he'll have to go back to the same ward.
Here's a picture of him at about 6am before we left to have his operation. 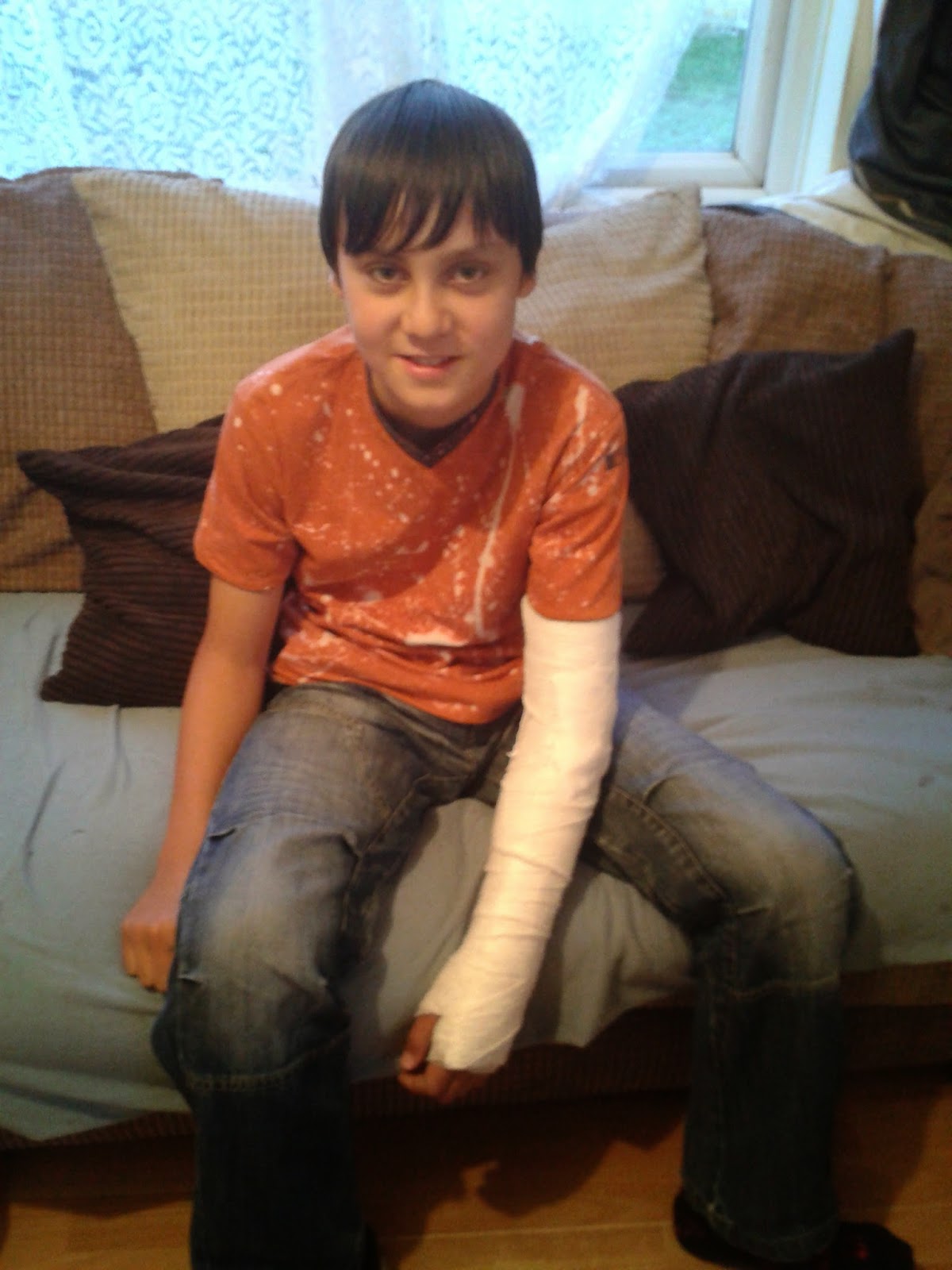 He's smiling away, little did he know what the day would hold!
So a very mixed bag of a day leaving me yet again up through the night not being able to sleep.
Tomorrow or should I say today we have got quite a busy day, I have to work and then hopefully this evening we are going out for a meal with my parents to celebrate Edens results providing that Clark's up to it. We've got some surprises for her.
So hopefully tomorrow I will be able to post some pictures and continue with the up and down saga that is my life!