The childrens, not mine!
Clarks birthday was at the end of last month and he recieved some money as presents so we ordered a PC Tablet for him off Amazon. Well to cut a long story short, it never arrived, we rang, they sent another one, it arrived, the screen was lifting on it and it wouldn't charge so we sent it bank and after about 4 weeks of trying to sort it out the money finally went into our account from the return yesterday.
So off we went into town so he could get one in Argos. 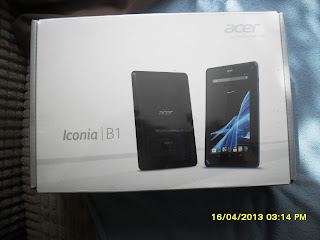 He's got it and he's chuffed with it.
Soloman recieved money and some Waterstones vouchers, so we called in there and he bought two space books and a book on dinosaurs. 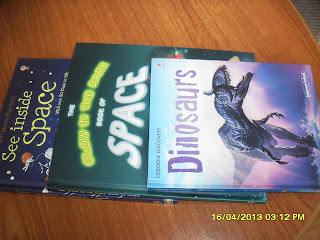 He also bought some Lego, but he'd undone the box and it was half made before I could take a picture of it!
Cody then decided he wanted to get some money out of his account and buy a couple of books. As their bank is only a couple of doors away we said OK.
He bought these, 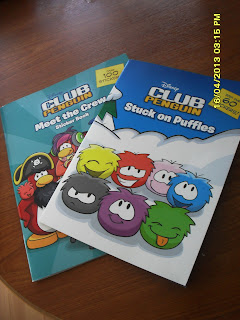 ﻿
Callum then decided he wanted to join in, he had to make a decision between about 5 knitting books and settled for this one. 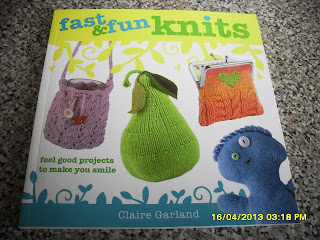 I've finished Codys cardigan and sewn on the buttons, he says he wants to wear it tomorrow so you might get a picture in the next couple of days.
I'm now knitting slippers for The Biggin Hill Romania Group﻿ I've mentioned them before. I've set myself a two week target of knitting as many as I can. I'll let you know how I get on!
Posted by Bridget at 21:34