Yesterday was mine and. Malcs wedding anniversary, 18 years to be precise.
So where did we go, why the Tank Museum of course!
The boys found this table with tanks, soldiers, boats and things on 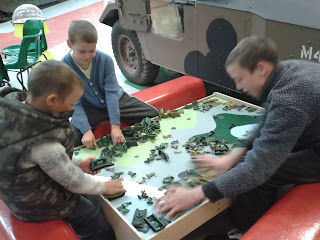 They played there for quite a while with three other boys, Malc had a little walk round by himself and I got talking to the man who sat next to me. He only home educates his four children! The came from Croydon but were staying with friends in Christchurch who home educate too. It's such a small world.
The boys really liked this tank, Callum thinks it looks like an owl but I think it looks like that hoover, I think it's called Henry! 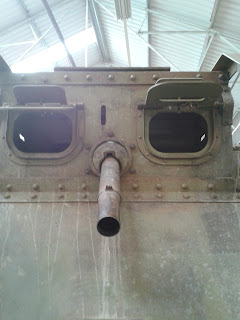 We got home and my Mum  and Dad came round and we had a takeaway as a treat. We recieved some lovely presents and had a lovely day.
Today we had a walk with the dogs at  a local recreational ground and then went shopping.
Clark has sent his photos to a wildlife competition that we were told about when we visited the farm on Sunday. You can enter as many as you like and there's a monthly prize of £25 to spend on Amazon.
So he thought he'd give it a go, he's going to try and take some more wildlife photos and send some more in.
Tomorrow I've got to pack all the boys bags as they are off to camp!
Rather then than me it's meant to rain for most of the weekend. Hehe!
Posted by Bridget at 21:46