Too Sunny to Blog

We`ve had a fabulous weekend. The sun has shone.
We went out to breakfast on Saturday at our favourite restaurant. The have a special deal where you pay £8-25 per adult and two children go free, so it usually costs us £20  for seven of us as we only pay for me, Malc and Eden, but this weekend they were doing an even better deal where one adult pays £8-25, another adult eats free and each adult whether they pay or not has a child go free. So as we had my Mum and Dad with us we only paid for two adults and one child, which worked out as £20 for nine of us. It's a full cooked breakfast with cereals, toast, yogurt, fruit and croissants. You eat as much as you like.
As it was so sunny we invited my Mum and Dad to come over for tea, but as we'd all eaten so much already we just had a ham salad sat outside with Eden playing her guitar, it was lovely.
Sunday morning was church, here's Eden and Chris, our church youth worker playing guitar for us to sing along to 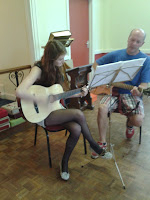 There was a lady there with her two young lads who had brought her b-b-q along and invited us to an inpromptu get together over our local fields. So we went home to let the dogs out and grab a bag of sausages and assembled back over the fields.
We played football and rounders, I even scored a rounder, many a year has passed since I last scored a rounder!
We left about 4 ish, had a very quick tea and then it as back to another chuch for the evening service as Eden was singing with their Youth Band, it's such an informal service which is good with my boys! We do go to church but with the younger boys it's no good doing something long and formal, we never go to Holy Communion as the boys get bored and start fidgetting!
Yesterday the boys got the paddling pool out and spent most of the morning splashing about.
In the afternoon Callum and I went to our knit and natter group, the other boys and Malc went to the library and did some school stuff on their computers
Malc, Soloman and Clark went to Cubs in the evening.
Today is the last day of Edens holiday so she's had a friend over and they went to the beach.
The boys have been playing in the pool again.
Malc got our tent out to make sure it's ok as him and the boys are going camping with the Cub/Beavers in a couple of weeks. Clark, Soloman and Cody have their sleeping bags in there and have run an extension lead into it, they reckon they are sleeping in it tonight. I think Clark probably will but Soloman and Cody will slip  back in the house when it get dark, I'll let you know tomorrow who made it!
Just before I go I'd like to say thankyou to those of you who have commented recently and say if your reading and haven't don't be shy, make yourself known, I don't bite. In fact I'm always very grateful when anyone has something to say!
Right knitting needles call, I've not had a lot of time to knit over the weekend.
Posted by Bridget at 19:43