And the walls come tumbling down!

Our life is so hectic and so full that there's not a lot of room for adjustment. When something in the routine breaks down, everything collapses.
This week I feel like I've lost days, been so busy and had so little sleep. Wednesday I did everything on automatic. Thursday was better and today I've purposely done nothing except basic house work. I've ordered everyone not to book anything and we've all had the quietest of days to relax and rest our minds and bodies.
I won't go into the full details of everything that happened with Malc, but I called an ambulance for him in the early hours of Sunday morning as he was shivering uncontrollably and clutching his stomach in pain. Fifty minutes later a first responder arrived who assured us that an ambulance was following. He gave Malc morphine straight away, he knew nothing of his symptoms, he'd been told he had shortness of breath! Thirty minutes later he contacted control by his radio to find out where the ambulance was only to be told one hadn't been dispatched. He gave Malc more morphine but wouldn't be able to give him any more and he knew the effects of the drug would run out in about an hour so after waiting another 45 minutes with us decided to take us in by his car, which apparently he's not meant to do!
Malc was seen and put on a ward, had an x-ray, ct scan and ultrasound on his kidneys and after first diagnosing a chest and kidney infection they changed it to a chest infection right at the bottom of his lungs that was passing through the membrane through to his internal organs in his tummy. He was put on IV antibiotics and stayed in that night. The next day they moved him onto a surgical ward because there were no beds anywhere else, we couldn't visit because it was only for an hour and just two people at a time. By dinnertime he'd had enough and was going to discharge himself as he was by then on antibiotics orally. The doctor came round and discharged him on the provision that he saw his own GP by the end of the week to make sure the infection had gone.
Tuesday he had his six month appointment with his chest consultant anyway and she gave him steroids which he usually needs to clear up chest infections. He'd told the doctor on the ward this but they wouldn't listen which is another reason that he wanted to leave.
As he's self employed I had to do his work with the boys which was very stressful as I don't know where most of his rounds and drop offs are!
He's been to see his local GP now and although he has to finish the course of meds it looks like the infection has gone, which is good news as if it didn't go he would have to go back into hospital to maybe have his lungs drained! Doesn't bear thinking about!
Friday was the usual Youth Club, Beavers and Clark had Scouts in a local forest running around in the pitch black looking for Easter eggs! Rather him than me!
Today as I said has been quiet, I had these to sew up. 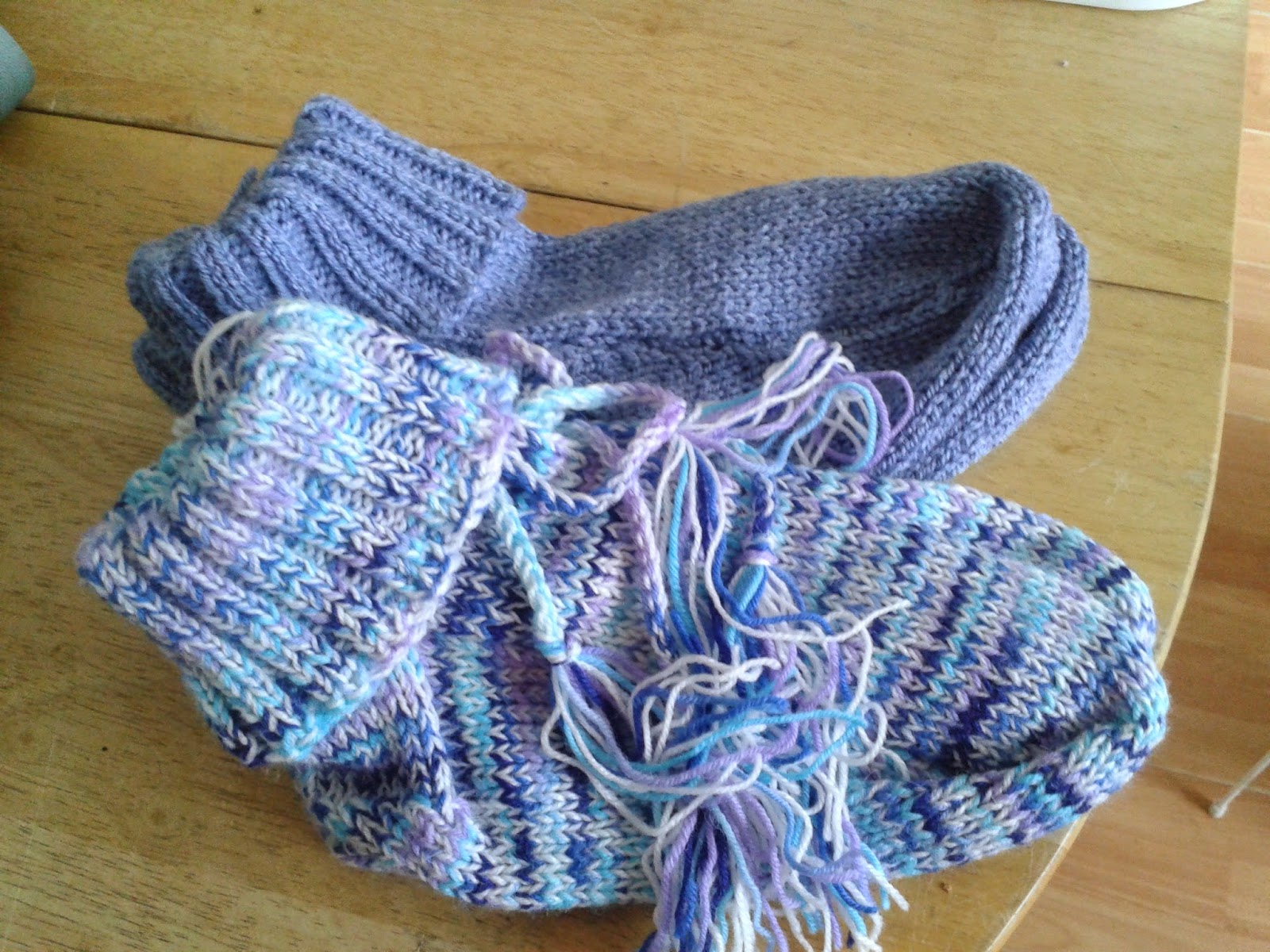 I didn't do any knitting until yesterday and I'd forgotten what size I was knitting so I had to count the stitches to work it out! 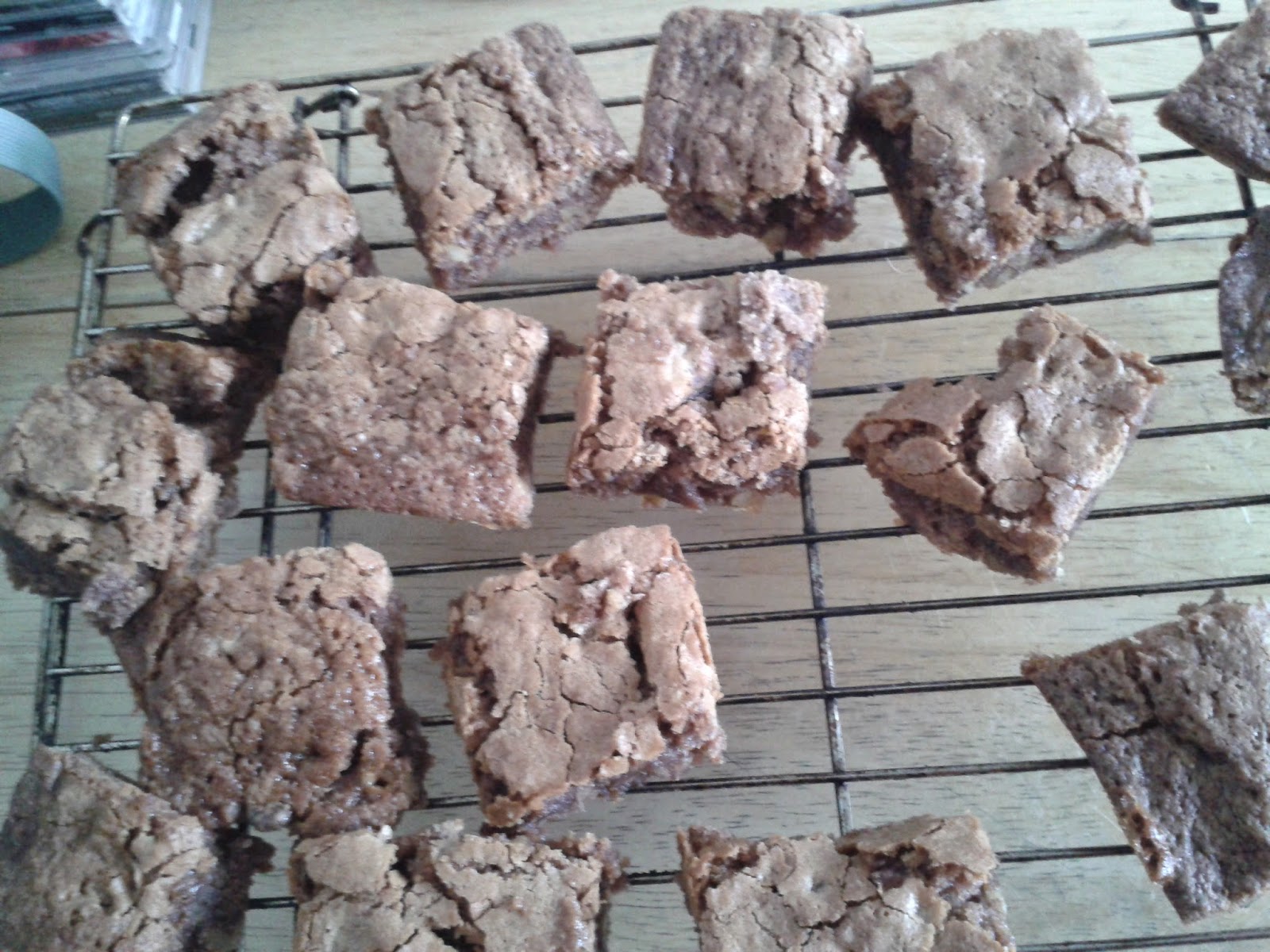 Callum made these lovely Brownies this afternoon, which I can tell you are delicious.
So we continue getting back to our busy, hectic schedule. Thankfully it's the Easter Hols so although Malc still has to work Eden is off to lend a hand if needed. The children have been great, really pulling together to help me either with Malcs work or at home when needed.
Thank you for your well wishes, Karen, Kath, Dreamer, Amanda, Jo, Sue, Morgan, C, Helen, Em, Melissa and to newbie Mitzi, who discovered my blog recently and must have wondered what on earth was happening!
I opened my emails in the mornings and found a few new comments each day which really cheered me up and helped me to start my day!
Posted by Bridget at 18:41