After work yesterday I sat out in my front garden with my knitting bag watching lots of the neighbourhood children playing.
A couple of my neighbours came out and sat with me at various time and we enjoyed a cup of tea or ice cream together (I was out there for a fair while!)
One of the neighbours put a sprinkler on her hose and put it in the middle of the road. Luckily we live right at the end of it and there's no through traffic so we could move it if we needed to. 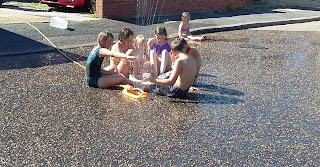 The little girl in the back of the picture actually laid down on the puddle she's sitting in and pretended to be a mermaid!

Unfortunately the neighbour is on a water meter so she only put it on for 20 minutes but they had so much fun in it. 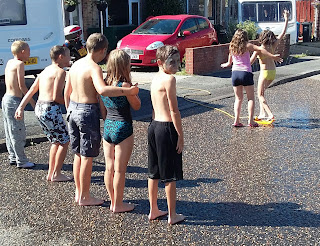 Soloman had a sleep over last night at his friends house at the beginning of the road and had a great time. He's gone with his friend and Cody to a swimming pool today with his friends Mum.
They love this particular pool as they have a "fun hour" where they get out loads of inflatables and put the sprinklers on.
We've had a couple of showers today so I've had to get on with some housework!
It's really hazy with oppressive heat and just not nice which is a shame.
Fingers crossed tomorrow will be better.