Eden has a date for starting University,  24th September,  so not long now.

She went clubbing  with friends on Thursday evening and then Malc, myself, her and Luke went for a lovely meal on Friday dinnertime which was so nice as I hardly see her these days.
I have started to put things away in a box for her for Uni but I'd better get a wriggle on as I want to get her some towels and a four piece dinner set. We've got saucepans and a frying pan. A colondar to drain her pasta and a pasta serving spoon as that's what she reckons she'll be living on!
On Thursday night whilst she was out the rest of us went to our local park to watch the fireworks over the bay again. 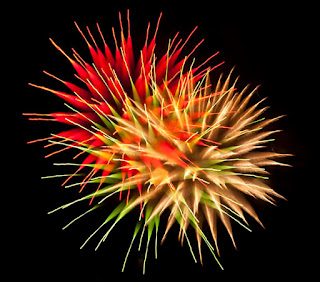 The boys and several of their friends went in the little paddling pool they have there,  even though it was pitch black and the water was freezing! They seem to love it though, we took snacks and replaced the wine with a flask of coffee as it was considerably colder down there this week.
We've had quite a bit of rain here in the last twenty four hours and you can see the garden looks lusher already, the plants are standing taller and looking greener so it was very much needed.
I have been indoors and catching up on crocheting squares for an ongoing project that I've been involved with for a while.
It's still for refugees, I crochet them along with other ladies and then we send them all to a lovely lady who sews them all up and sends them on to the charity that distributes them. 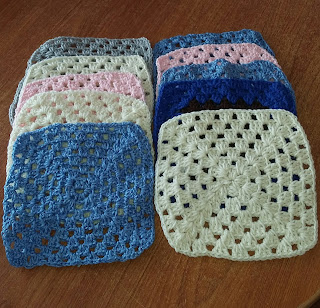 Today I'm giving Eden and two friends a lift to a concert mid afternoon. They're getting ready at a friends house which takes about three hours looking at the time she wants to get there, then we'll pick her up later, thankfully this side of midnight!