The sun is back

Way to hot to walk the dogs today, I've done some more sitting in the garden, crocheting squares today.
As it's Bank Holiday most of the neighbours were up to something so I spent a couple of really quiet hours and managed to do six squares.
Cody and Soloman played with one of their friends and built this, 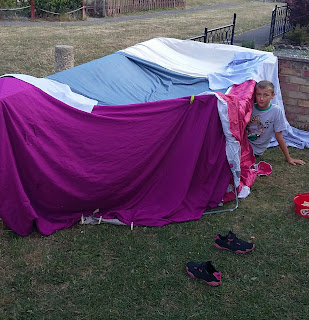 I have noticed that they are getting bigger, this one had two "rooms" inside.
Later this afternoon as neighbours returned home and more children were out playing the sprinkler was brought out again, so fun was had by all.
I'm now settling down in my armchair,crochet hook raring to go, let's see how many more squares I can make!