We went to see the fireworks last night which were lovely.
The children played in the park and paddled in the little pool they have there.
Whilst we were waiting for the fireworks I saw one shooting star (and lots of planes! )
We got home at about 10-40 pm and one of my neighbours that had come with us with her daughter was going to put a blanket down and lay in her back garden to hopefully see some more and asked I'd I wanted to join her. 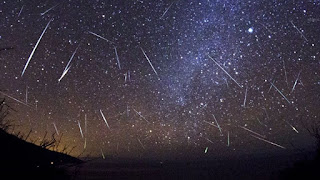 Well I did and we saw loads of shooting stars, some were spectacular.
It was so relaxing, chatting and exclaiming over every one we saw. They're all pretty much the same but the excitement every time we saw one was just so funny you can't help but exclaim "There's one!"
Unfortunately I didn't get to bed until nearly 2am and I'm already awake so I think  it's going to be a long day!
It was worth it though
Posted by Bridget at 07:48