Two birds with one stone.

Old readers of my blog will know that I help one of my neighbours and her son. Things have definitely improved in their house and lives.
Unfortunately two members of S's family have died this year, pretty much all of the older generation of her family have now died and she's been very depressed and has taken to staying in bed. She was persuaded to get up for a few weeks several months ago but a series of falls seems to have put her back into a depressed mood and she's been in bed again for several weeks.
Yesterday Malc and oldest son Callum went over to put up a new curtain rail at the bottom end of her lounge so I persuaded  her to get up to keep an eye on them.
This morning she rang me to tell me that she had got up again and as Malc and Cal had gone down the tip, one child was at work and another round their Grandmas that only left the two youngest so I popped over to her and tempted her outside into my front garden with the lure of a cup of tea and a piece of banana and walnut cake that I made yesterday.
This lady has not been out of her house in 2 1/2 years except for a hospital visit to have a cateract done months and months ago so I was astounded when she said yes.
After nearly tipping her out of her wheelchair at least twice just getting across the road we settled her in the garden. She spoke to several neighbours that went by and although I'd said to just come over for half an hour she ended up staying for two hours.
This was brilliant for me because I've joined a new project, sixty million trebles. I put up their poster a couple of posts ago but I'll put it up at the end of this post again.
So for two hours I sat and knitted, I know in the morning,  in the sunshine and everything! Absolute heaven. 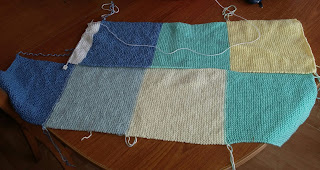 I have to do four of these panels so I'm nearly halfway through it and then I'll crochet round it.
So if you feel like joining in all the information is on this poster. 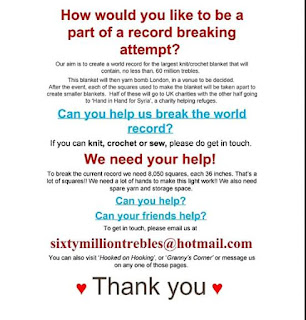 They also have a Facebook page, just tap in sixty million trebles, they're on Twitter and Instagram too under the same name.
Go check them out.