Saturday evening we sat outside the front of our house, took a bottle of wine and waited for it to get dark. By the time it was dark two more neighbours had joined us with their children and the wine bottles seemed to have mysteriously multiplied too! Funny that!
All the children were lead on blankets with their quilts over them looking at the skies. We did mange to see a few shooting stars but a great time was had by all. I think by the time it had got dark we had actually forgotten what we were there for!
I have spent most of the weekend sitting out talking to anyone passing and my needles didn't stop.
I have taught a couple of the local children to knit and they sit with me. Yesterday I had two new recruits, brother and sister. The lad was a bit reluctant at first? I guess because "boys don't knit!" I chatted to him about fishermen knitting and he asked to have a go. I can honestly say he's the easiest person ever I've taught.  I showed him one row and he was off.
I'm hopeful that they are going to either knit or crochet a six inch square for the #sixtymilliontrebles  that I'm involved in. The organiser would like the squares knitted by the children to be made into a border for the whole blanket which I think is a brilliant idea.
So to finish off some pictures of the children doing their thing. I did have six of them participating at one time but didn't manage to get a picture of them all together 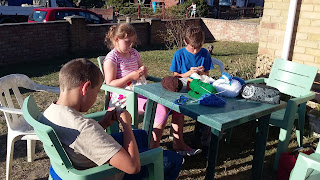 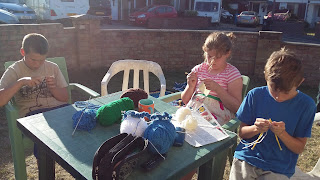 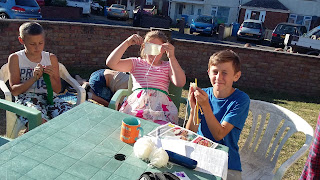