Today we went to the Priest House Museum. We have been there before but not for about five years.
We were aiming to go for their one adult admission and two children go free which would have cost £9-00, the ticket lasts a year. As everything goes though as it was school holidays that ticket wasn't available! Still it only cost £12 , so that wasn't bad for the day.
Today's theme was Transport.
We looked around the museum which has a functional Victorian kitchen, the boys made trains out of biscuits. Then we went to the Victorian schoolroom and they also have a mock up of a blacksmiths.
They have a new education centre which has been built since we went last. In there they had a load of tables set up with activities, so we spent 2 hours making paper boats and planes ( which were later tested out in the gardens) 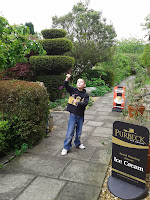 We also made pasta pictures of different modes of transport and made hot air balloons. 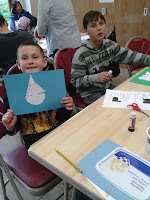 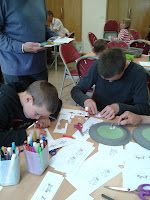 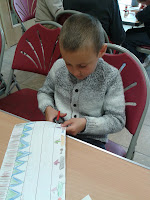 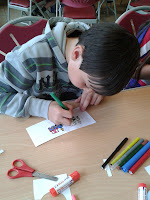 We had a picnic in their beautiful gardens, they also have lovely tea rooms which we didn`t go in as it usually  costs us a fortune. 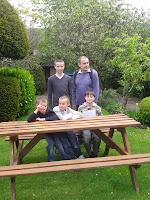 If you zoom in on Soloman ( bottom left) you can see he`s doing the "loser" sign and poking his tongue out! Little monkey !
We then moved on to upstairs to look round some more of the museum, they have old toys from Victorian times up to about the 70`s. Malcolm and I both recognized some of the toys. Frightening !!
Then it was home for tea, afterwards Eden wanted me to dye her hair and  as I write this our local youth worker, Chris, has come round to practice the songs that they  are playing on their guitars on Sunday at church.
I`m hoping  to sit for a while now and maybe pick up my knitting needles!
Posted by Bridget at 20:18