Starting with a joke!

In my last post I said that two of the boys and I were mowing the front lawn. One of my neighbours went by and told me that I shouldn't mow the grass, he pours beer all over his. So I looked at him puzzled, he then said it saves on mowing because it comes up half cut!
Boom, boom!
I thought that was quite funny!
I`ve finished the chunky knit cardigan that I was doing, I`m really pleased with it. I`m thinking of doing a smaller one for this young ladies sister as it knitted up really quickly and I have some more pretty chunky wool. 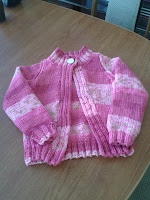 That will be another Christmas present under my belt.
I`ve started a baby blanket for the lady who I knitted the baby cardigan and hat set for, I can`t post it as she pops in to read my blog occasionally, you`ll have to wait until she`s received them which won`t be for a few weeks as I`m going to do up a parcel and send it when I`ve got together a few items.
Today we went to Upton Park with the boys. The two youngest took their bikes so they could ride aro..und, we also took a ball and had a game of catch on the big field in front of the house.
They have a new play track which is brilliant, lots of wooden things for children to climb on and through.
They also have a plant shop which is really cheap anyway but today they had 25℅ off so I bought a pot of 7 raspberry canes for £4-20 which was great.
I`m now off to do some knitting , gone are the days when you had a good film on TV for the Bank Holiday, tonight we`ve got Britain's Got Talent which isn't really my thing
Luckily we`ve also got  Springwatch. Chris Packham is a favorite in our house.
So I`m off for a bit of nature!
Posted by Bridget at 21:24