A weekend of baking

My opportunity for my first act of kindness for Lent came faster than I thought it would. I rang my Mum as usual as I do every night only to find my Step dad had a bad foot, it was a bit discoloured and tracking up his leg so fearing  DVT which he's had before I took him to A and E.
Although the Juniors Doctors strike was on it was quite empty when we got there and we were seen very promptly.
Unfortunately for us there were a lot of people being brought in by ambulances and there were four Code Blue, resus in 5 minutes announced so things started taking longer and longer. Thankfully DVT was ruled out and after an X-ray and blood tests an infection was diagnosed and antibiotics given.
We arrived there at 6-15 pm and left at 11-45 pm.
Thursday we were all so tired, how I went to work I don't know? 11-45pm is waayyyy past my bedtime!
On Friday night Eden had a little soirée to go to with Luke and some friends so she took my car, she brought it back in one piece!
She's looking out for her own car and although we've seen a few either the insurance or the Tax has been quite high. She knows the kind of thing she's looking for but we just can't seem to find it.
She's on Half Term this week so I think we'll set aside some time to go actively looking.
Saturday morning Soloman and Cody helped me do a load of baking.
Cody helped me make a trifle for tea on Sunday 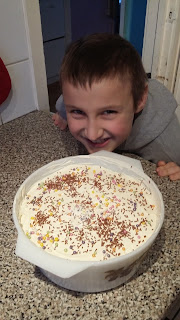 Soloman help me make some bacon diamonds with puff pastry 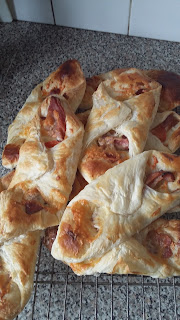 And some pizzas, we made the base in the bread maker and then put the tomato puree on and then everyone chose their toppings 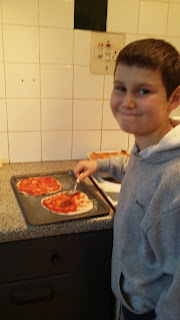 I made a chicken in white wine sauce pie 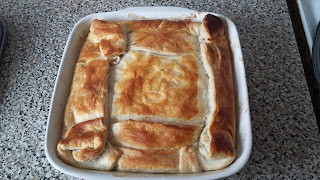 Then I made these 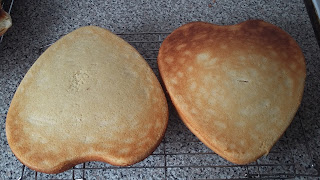 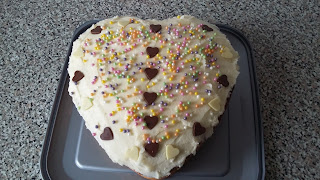 For Valentines Day.
Today has been sunny but cold, we've managed to clean the rabbits, a horrible job to do in the rain and I watch the weather and try and clean them out in between days of showers.
We're forecast some really cold weather over the next few days, the word snow has been mentioned for the top of Dorset, to mine and the boys disappointment we live in the South!
I'm looking forward to reading blogs from people further up the UK though and seeing all their snowy pictures!
Posted by Bridget at 14:49