The week that was my birthday

Tuesday!  Seems so long ago now.
The cake that Cal and I made 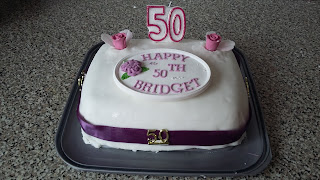 I had a lovely day, we went out for a meal in the evening which was wonderful.
I received quite a few bunches of flowers, here's one of them. 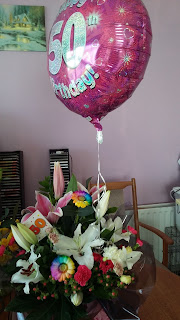 We went to Southampton Hospital for Callum's year check on his back.  He was signed off only for us to receive a phone call when we got home saying that one of the clips and two screws had come loose at the top of his spine. Apparently they'd taken a closer look at his xrays and seen it.
We were meant to get a call on Friday morning to sort out what Callum's options are now, having heard nothing by lunchtime I then rang them about every twenty minutes for a couple of hours only to eventually speak to somebody who told me the person I needed to speak to had left at lunchtime.
So I left a rather sarcastic message on their ansamachine asking them to ring me first thing on Monday morning.
Callum was devastated by the news and is saying that he doesn't want another operation.
I can't say I blame him, he didn't have the best of times a year ago when he had his big operation. I'm just so annoyed that firstly he was signed off and secondly left all over the weekend not knowing his options.  He's been asking me so many questions and I just can't answer them as I don't have any information.
Yesterday was spent in A & E again with my Stepdad, he was diagnosed with pneumonia!
Today has been spent very quietly at home, we picked Eden and Luke up at 2 am as they'd been nightclubbing and although we didn't get up early this morning I think my body is too old for these odd hours! That's why you nightclub at eighteen not fifty!
I'm really hoping that next week is going to be a bit calmer, but I won't hold my breath!
Posted by Bridget at 16:51