Trip into town and knitting

We really don't go to town that often but with it being Eden's boyfriends and my best friends birthday in a couple of days I wanted to get a couple of bits and pieces.
Eden's boyfriend will be eighteen, so Eden came up with the great idea of getting him eighteen things and putting them in a box.
She had nothing and was going to get all eighteen presents in town. She was going to do this in the two hours from when we picked her up at 3-30pm until 5-30pm when just about all the shops would be closing.
Sometimes I seriously doubt she has any of my DNA, I am so organised and she just floats along on a cloud!
She managed to get fourteen!
When she asked Luke what he wanted for his birthday he originally said he wanted a panda! After looking into adopting one for a year and finding it was beyond her means she thought she could get him a cuddly teddy one instead so most of the two hours was spent running from shop to shop looking for a black and white panda!
We finally found one at about 5-20pm at Clinton's cards, although it was on their Valentines display it will be fine for what she wants.
She's gone to Asdas today just to get a few little things to make up the total of eighteen presents.
I think she was in a bit of a panic last night until I went over a few ideas with her about a couple of things she could get so I really hope she has learnt that it pays to be more organised!
We'll see!
On the knitting front I have been knitting a couple of little cardis for my Mums friends who's having a baby boy in about six weeks. I've just got to find some pretty little blue buttons to put on them 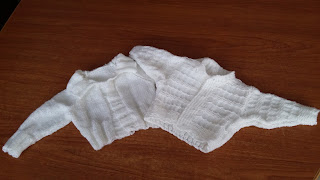 I'm hoping to do a couple of pairs of mittens and boottees tonight, then I'm starting on a knitted blanket. That will be the complete set.
Posted by Bridget at 15:53