Firstly I'd like to say hello to a couple of new followers, particularly Lisa whose blog I use to read all the time and when we lost our main computer I lost a load of addresses and couldn't remember most of them. So now she's found me I can go and visit her again which I will do later.
In looking to find who my newest follower was though I've managed to follow myself! I didn't even know you could do that!
Today we only took five dogs for their walk, Medi is nearly twelve and has had a couple of long walks over the past couple of days and although I'm sure she would be game I do like to rest her between really long walks. Max has a problem with his shoulder which I will write about when I do a write up on him, but this makes him limp if he's walked too much so I wanted to rest him too.
Clark and Eden went to the library this morning to do some work on their computers. Clark is looking to get his photographers badge in Scouts and had to go and print out some photos as our photocopier is playing up at the moment.
So Callum and I bathed some dogs
Nieve 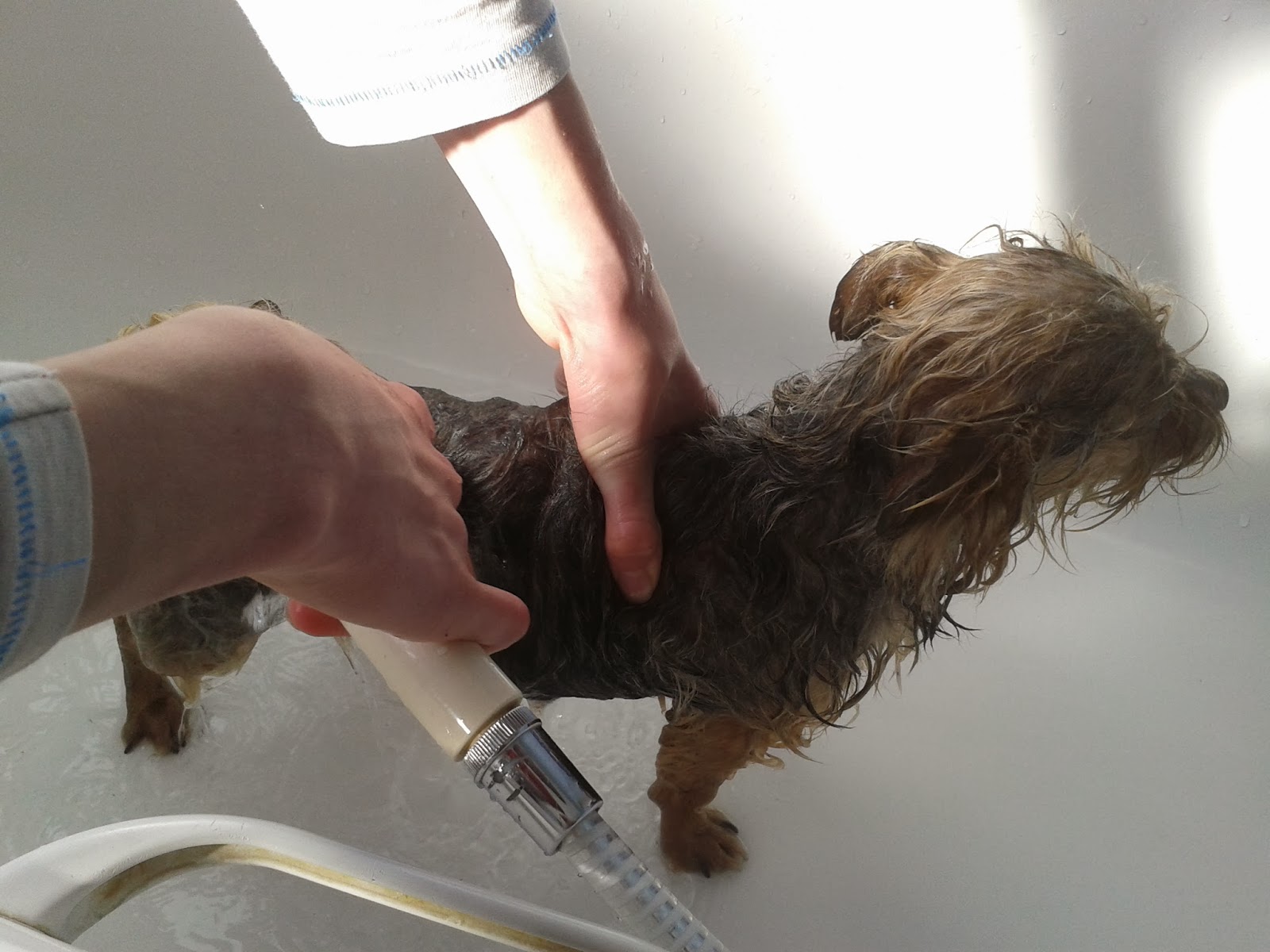 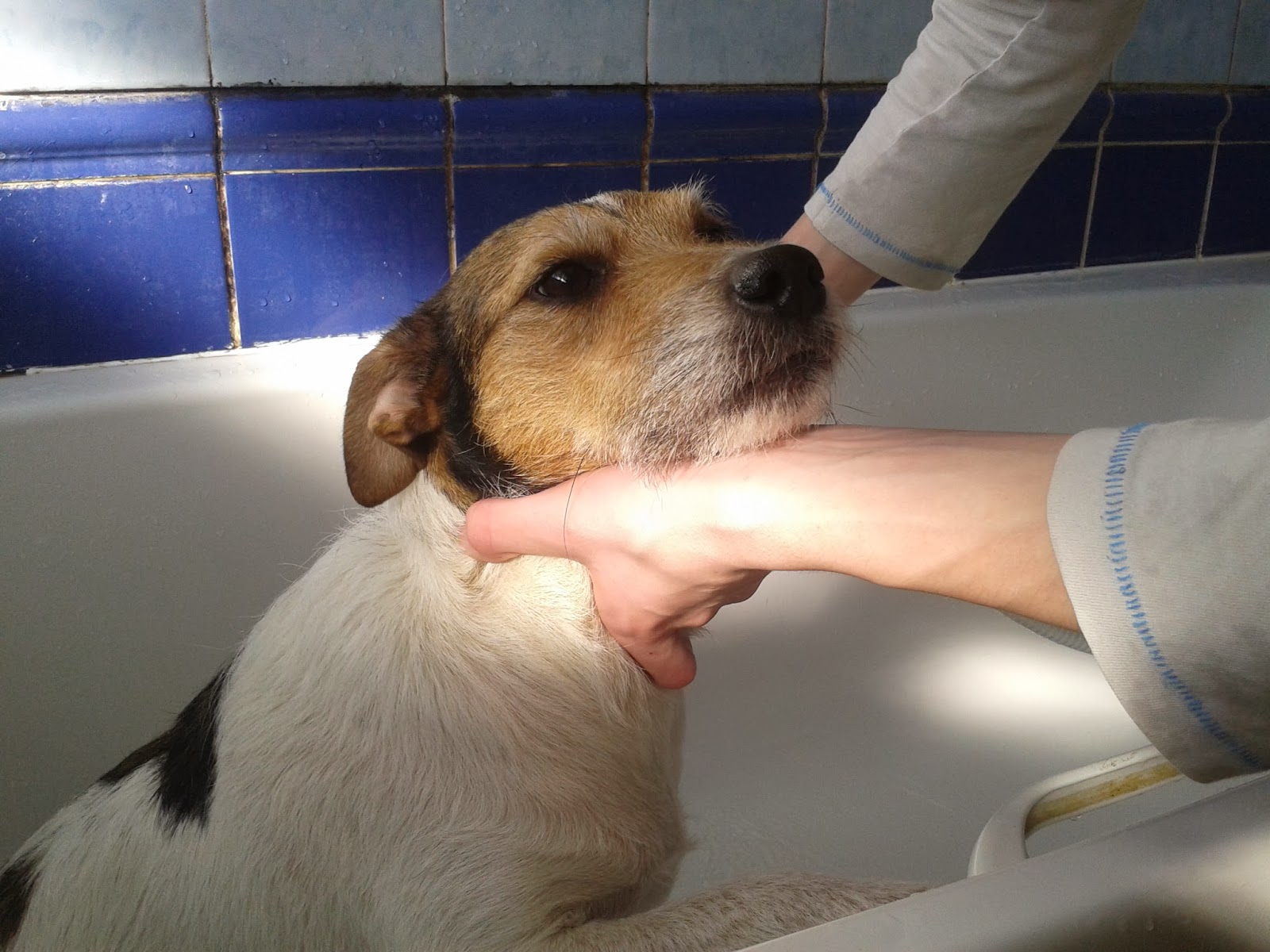 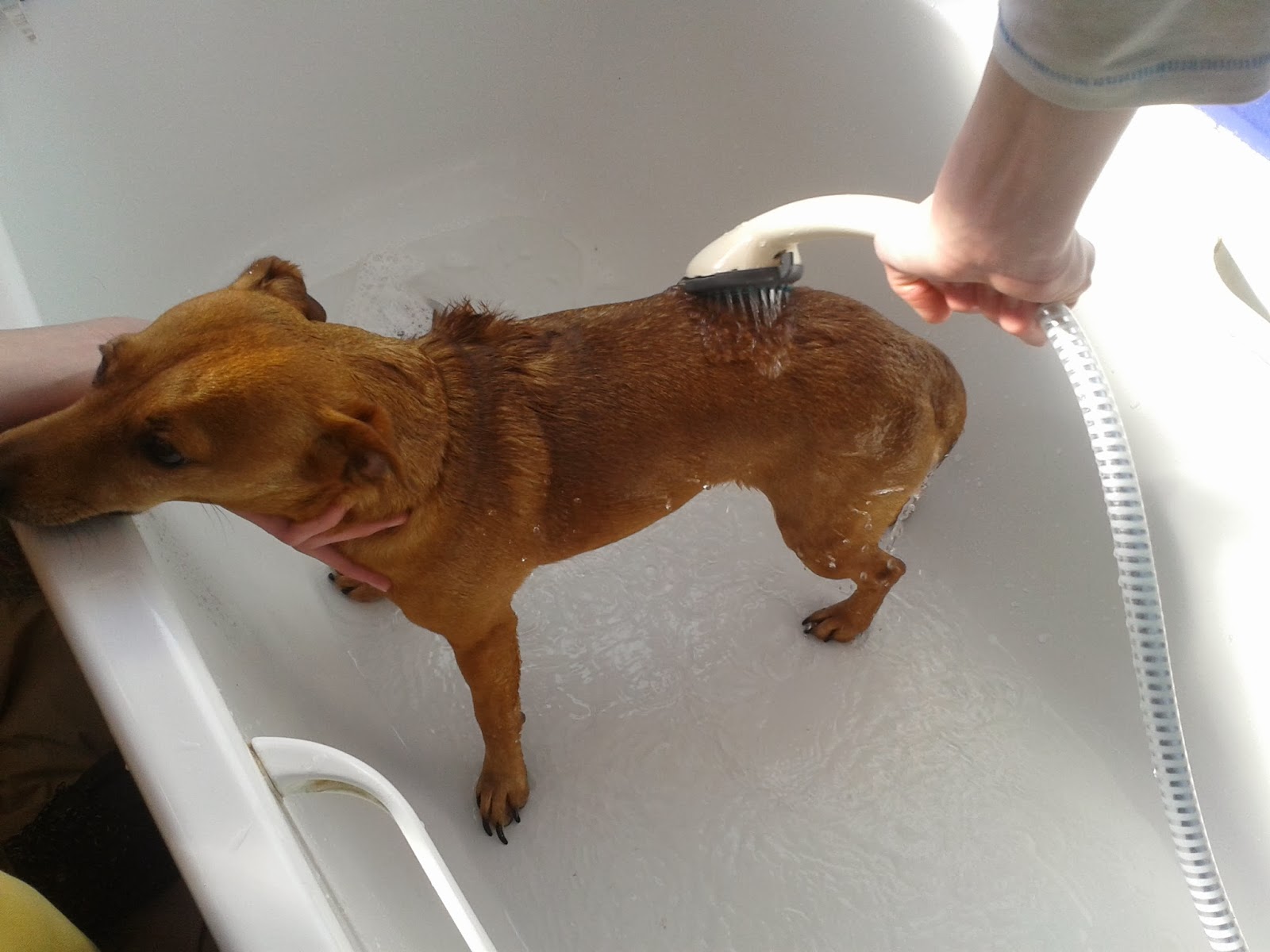 Tula, who was by far the dirtiest 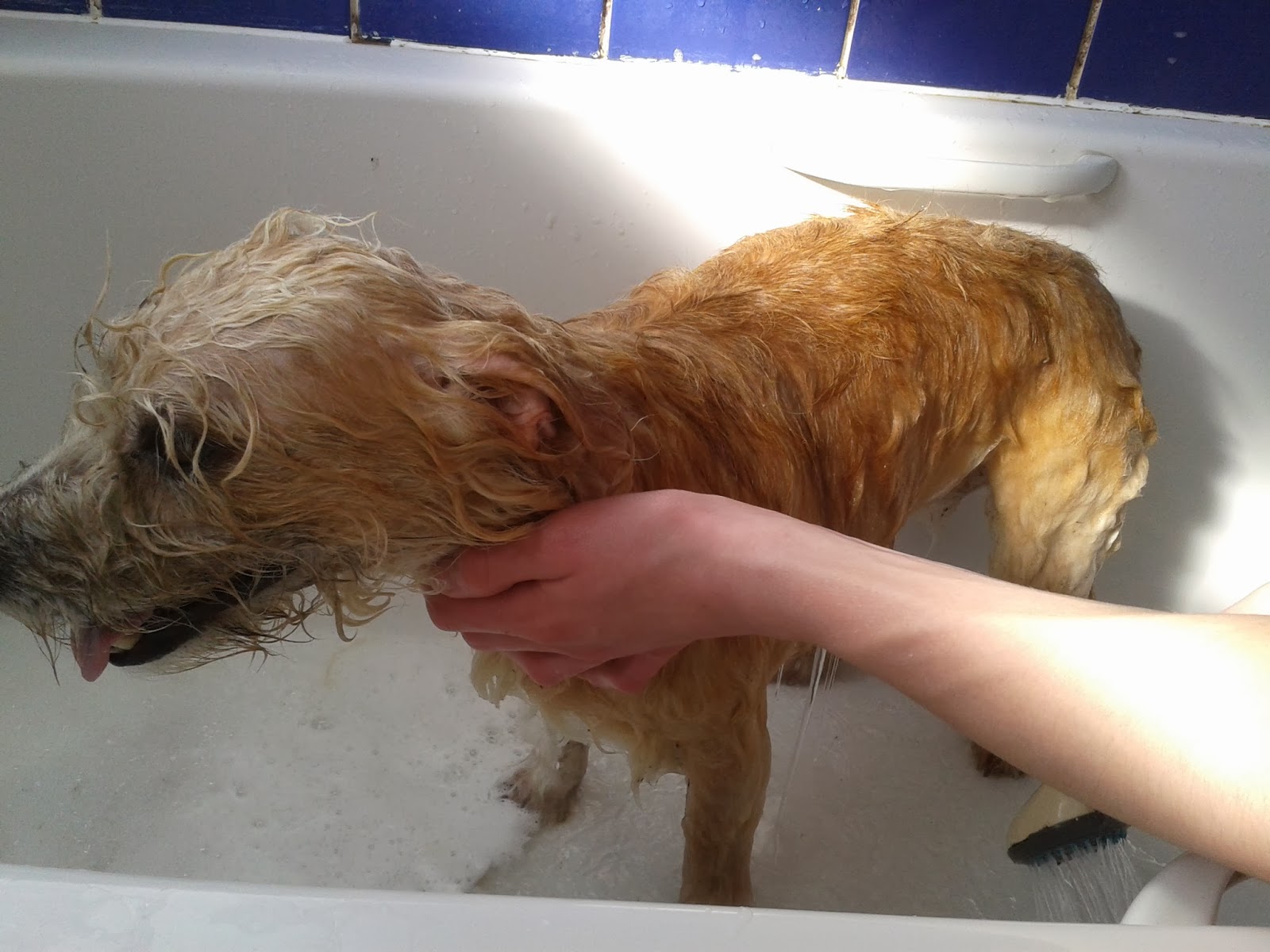 After they were bathed we had the mammoth task of cleaning the bathroom as there was water everywhere and the actual bath was black.
I managed to finish this off this afternoon, So it's ready to send.
I'm glad it's finished. I'm really pleased with it, but with a pattern in it and using 4ply wool with really small needles it seems to have taken an age to knit! 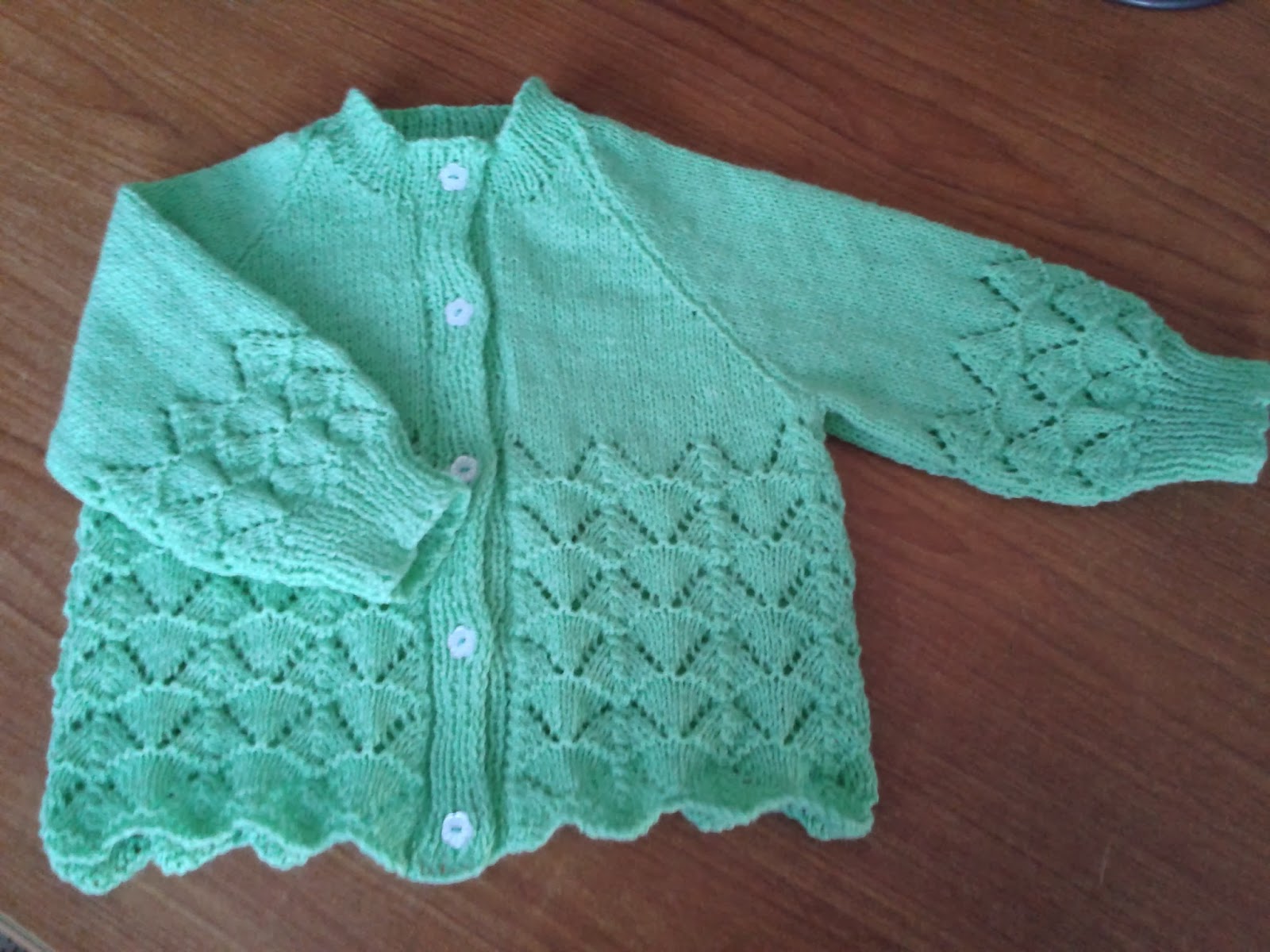 I've already started on some bedsocks that I promised to a friend a while ago, they should only take two or three evenings and then I'm doing some dishcloths that I promised somebody else.
I've had to tape Crufts tonight as the children want to watch Ant and Dec and The Cube. I was really pleased last night when a Staffordshire Bull Terrier came third overall in the Terrier group. A lovely Irish Wolfhound won the Hound Group. I'm really looking forward to the final on Sunday night.
I've never been to Crufts, it's on my wish list. I think I would be the first one in the queue when it opened and the last one to leave, probably with a couple of dogs in my rucksack, up my jumper and anywhere else I could think of too!
Anyway off to do another row on those socks!