A day of learning

Firstly I have to say hello to Helen over at Frugalknit-wit and pass on some pattern information!
Helen... The pattern is  King Cole pattern number 3459. It uses double wool and is done on ordinary straight needles. It has several patterns for different socks but I knit the short socks with turnbacks and just make the bit of sock between the heel and the ribbed cuff shorter.
So much going on here today, Malc and the two eldest went to work again this morning. Whilst they were out I did some housework, honestly, if I had a pound for every time I've mopped the floor today I would be a very rich lady!
Soloman and Cody also did some schoolwork. 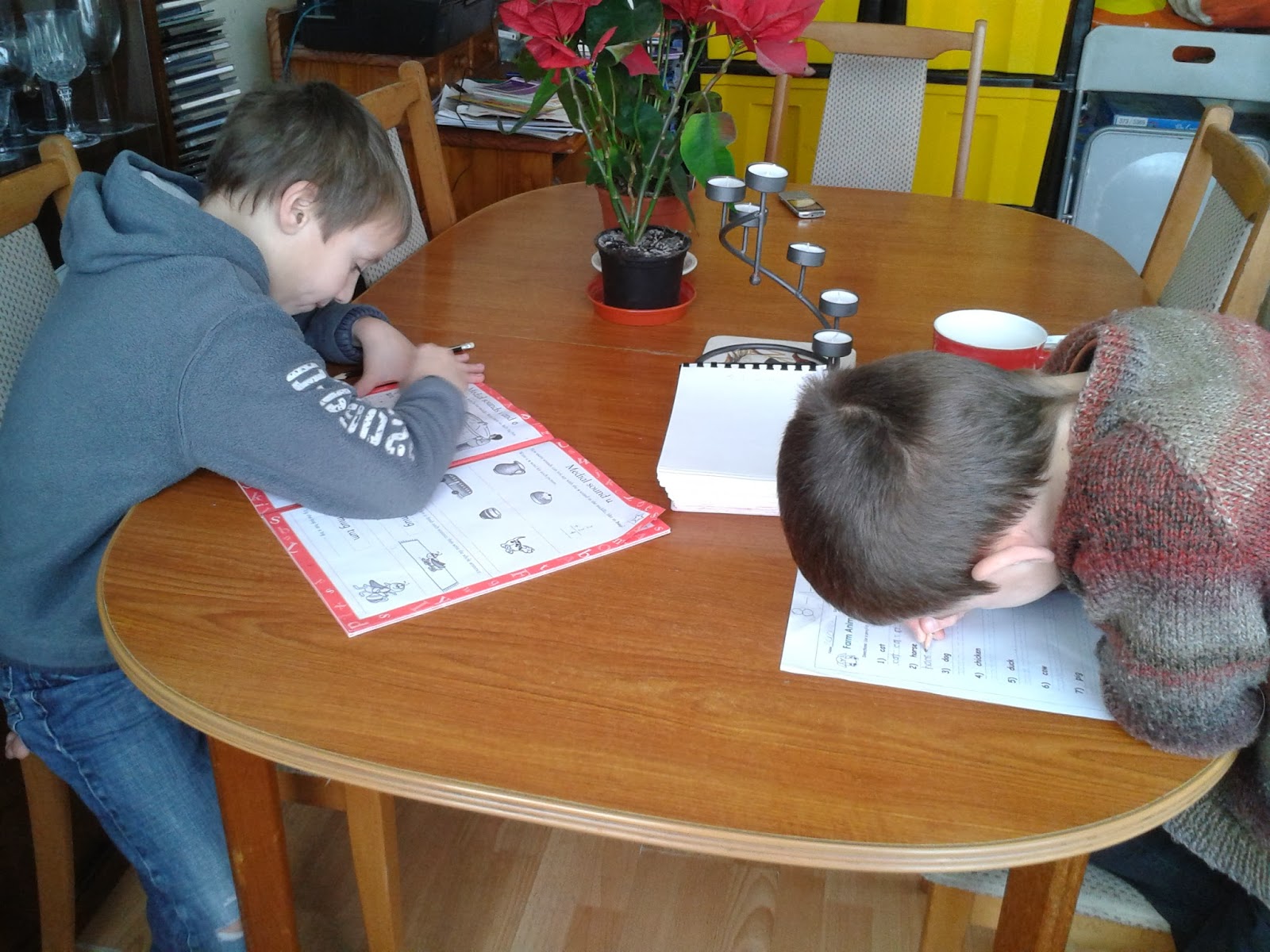 We managed to get quite a bit done. The workers returned at dinner time and we had some lovely hot crumpets dripping with butter!
One of the targets I set myself this year was to teach Cody how to do Granny Squares, at the moment he just crochets endless amounts of chain! So figuring the sooner we get started the sooner he can contribute to our charity knitting/crochet we had a go, 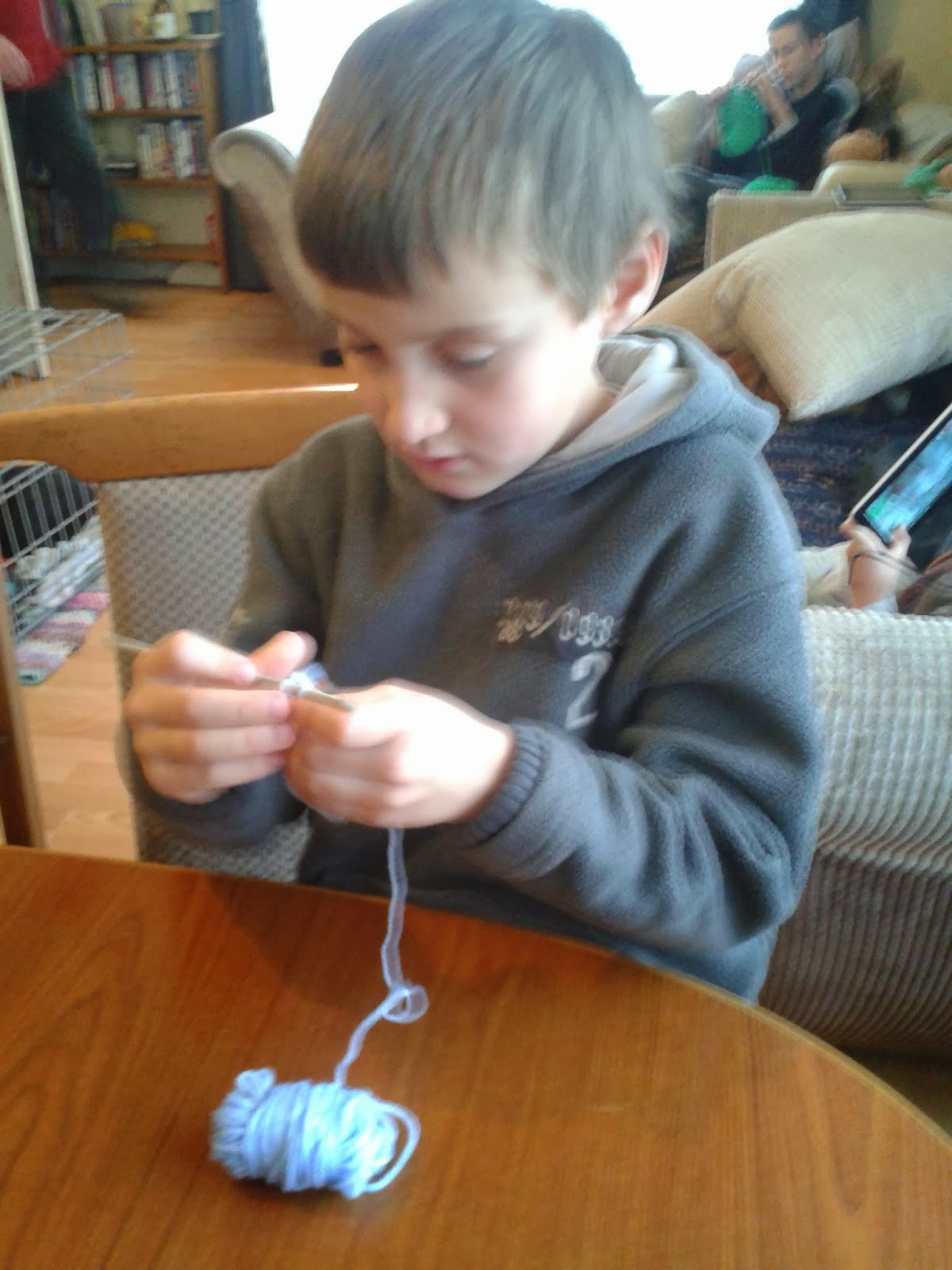 He picked it up pretty quickly, here's his square, 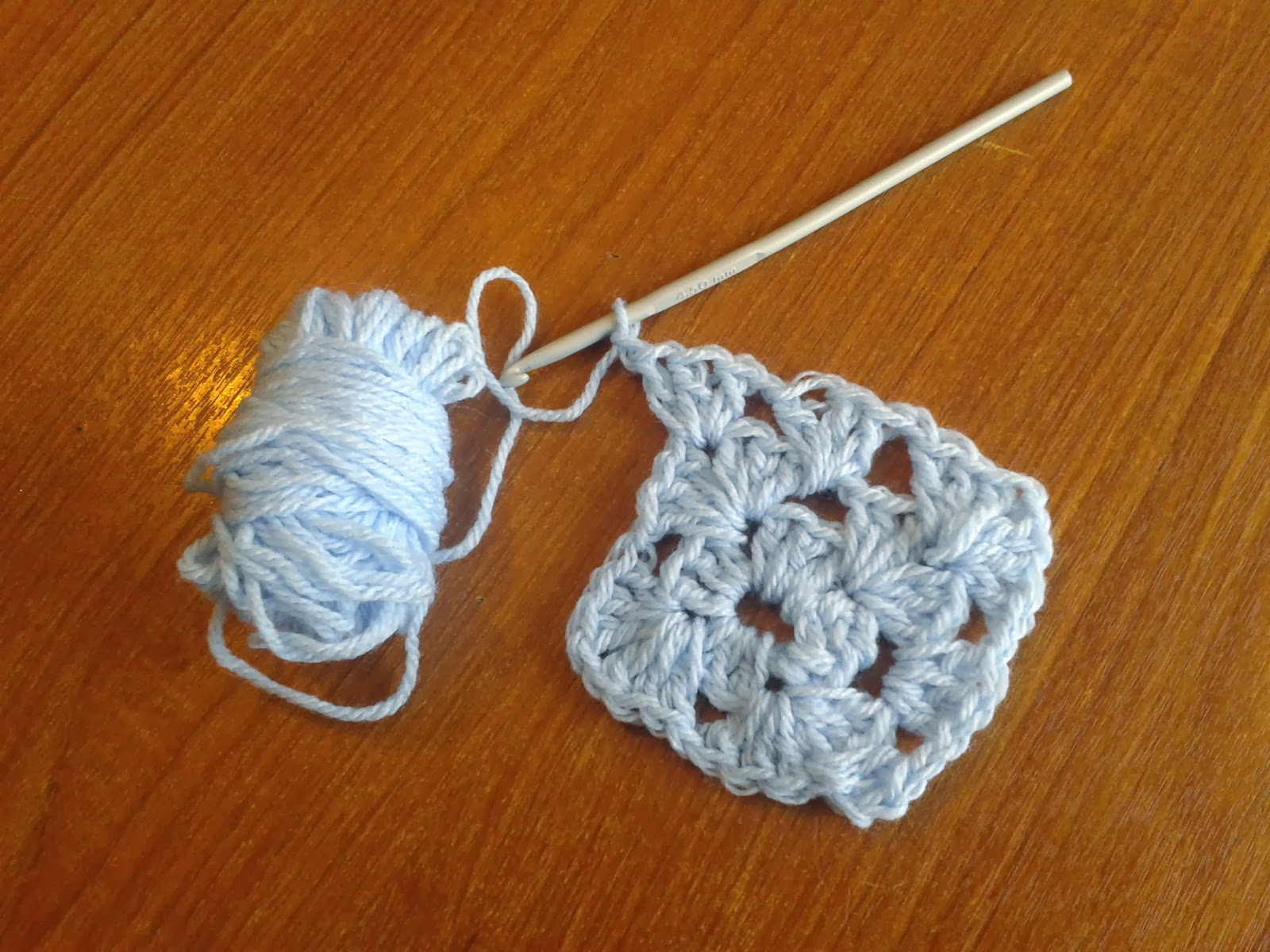 It's actually quite a bit bigger now as I took this picture earlier and he's been going for most of the afternoon!
Back in September my parents asked Callum what he wanted for his birthday and he said some wool, he wanted to crochet a throw for his bed. So he received some green and beige wool to match his bedroom colours. Last night he decided that he wanted to start on it, Clark offered to help. This has continued onto this afternoon, they are doing big Granny Squares to sew together to make the throw. 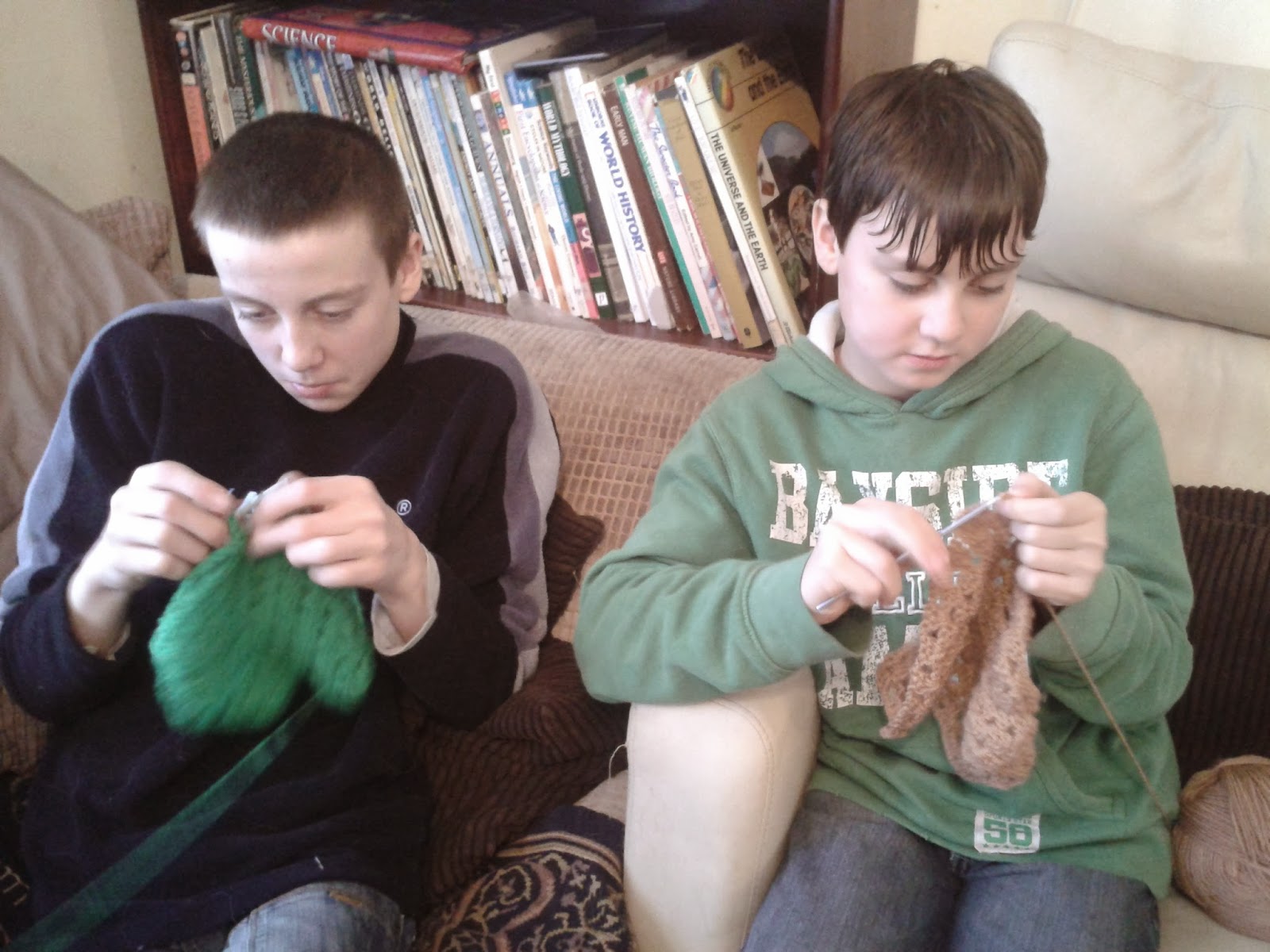 I'm also in the crochet mood and I'm doing a shawl for my friend that I did the hats/mitts set for. 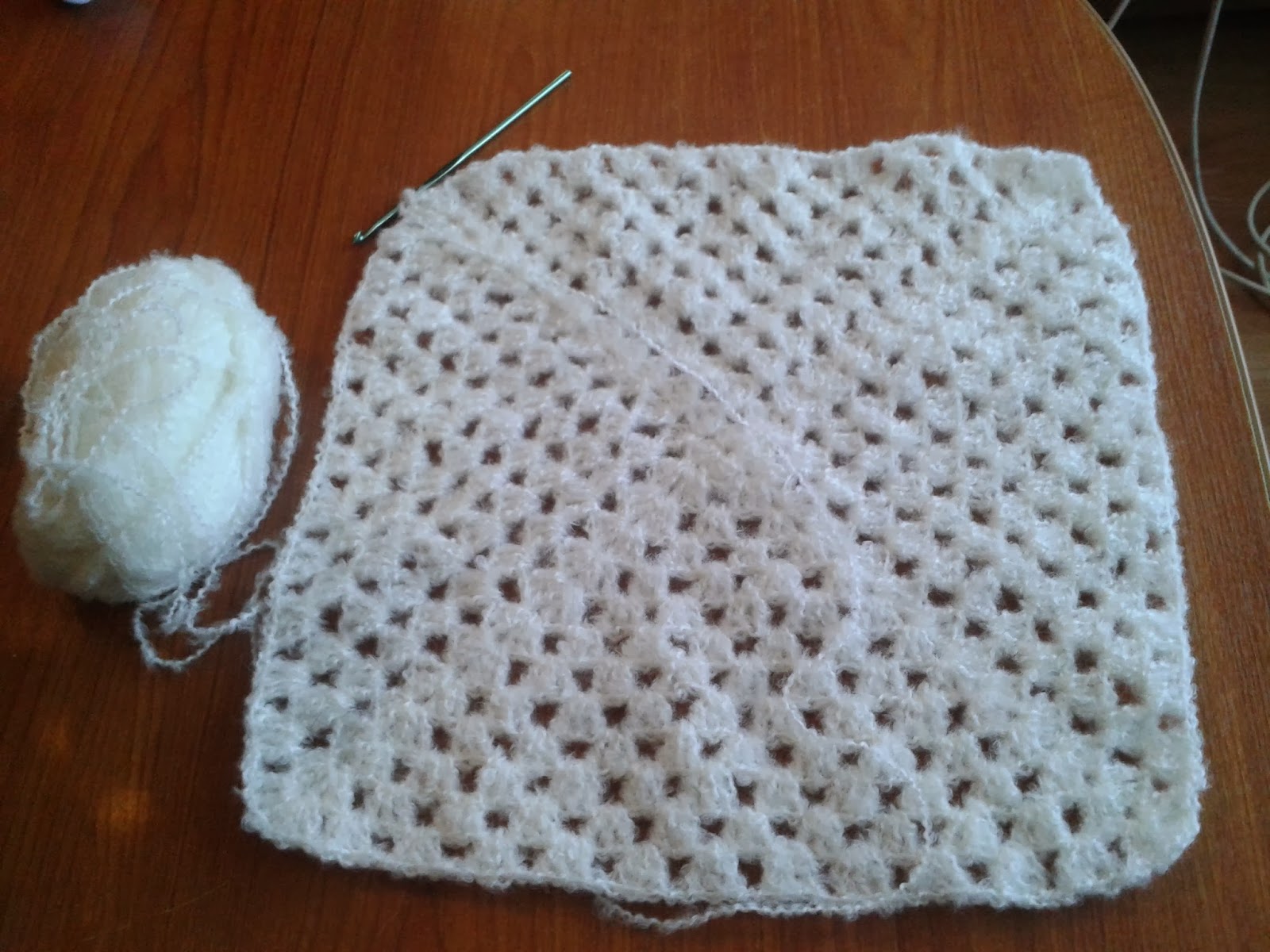 I made a Crofters Pie for tea earlier, mince, onions,mushrooms and carrots with scones on top. If I remember I'll take a photo for tomorrows post. People call different dishes different names according to the region they are from I think but that's what it's called here.
We  watched Stargazing Live last night, Brian Cox Is a firm favourite in this house. Eden is taking Astronomy as one of the GCE's this year and Malcolm and Soloman are very into stars and planets. It's on for three nights so we will be glued again tonight.
The weather situation is much better here, we actually saw some sunshine this morning, unfortunately we've had rain this afternoon but nothing much.
At least we were able to uncover the rabbits for a while today!
Posted by Bridget at 16:24