First lot of knitting for the year.

We have friends coming to tea today and the mum is expecting baby number four in May. She doesn't know what sex it is so I've done her these in a lovely fluffy cream colour 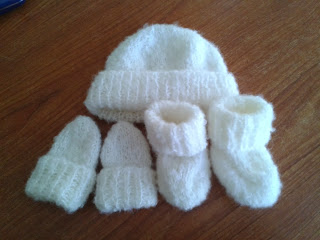 We've had more rain overnight but Malc and I managed to walk the dogs at a local park during a small dry spell this morning. I think I came home muddier than the dogs!
New Years Eve was spent indoors with the boys, we had rain and hail about 11-30 pm so I didn't think there would be many people about at midnight. At the same time we also had thunder and lightning with a huge clap of thunder making me jump out of my chair, despite the fact that it made the boys jump too they thought this was hilarious.
After we'd wished each other a happy new year we all ran over to the top of the road where Eden was at a party and bestowed new year wishes on them. We came back and went to bed about 2am. There was only one other household out which is really unusual as most of the road tend to come out.
New Years day was spent in the company of my parents for lunch, afterwards the adults sat around chatting whilst the children played on their new tablets. We don't get many uninterrupted chats so it was lovely.
Last night it was very windy and wet again, so we all had lovely hot baths and spent the evening watching TV with Sherlock Holmes being the hit of the night.
This morning there has been a lot of floor washing due to some very muddy paws and general housework done.
Our friends are arriving in just over an hour so I'm going to get a salad made up and sort out what else can be done now to save time later!
Posted by Bridget at 14:05